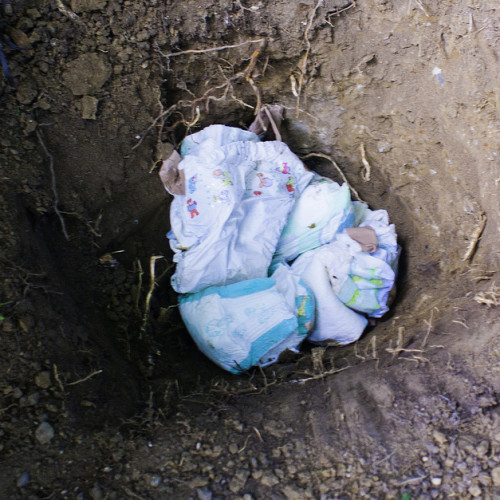 Composting diapers is an environmentally responsible method with no impact.

It’s hard to believe that something the size of a sack of flour could generate a mountain of waste. But every year in the United States babies produce more than 18 billion diapers that are thrown into landfills.

This struck me hard when I became a parent 10 years ago. My wife and I welcomed a beautiful baby boy into the world along with a houseful of gadgets and disposable products, aka. “brandfill”. Every week we deposited heaps of diapers and wipes into our garbage and boxed up toys and gizmos he’d outgrown.

By the time we had our second child I realized just how much waste — particularly poopy diapers — we generate. It really got to me. While providing your baby with a diaper is not optional, the lifecycle of that product once it leaves his/her behind is.

Surely there has to be a more environmentally responsible way to diaper, I thought. So began my research and a frustrating finding: Every diapering product — be it plastic, cloth, or semi-compostable — is a consumption of natural resources, whether it’s gallons of water for laundering or acres of landfill for disposal.

Proponents of cloth diapers claim it’s better for the earth and baby to wash and dry nappies. Disposable users rave that plastic diapers are more convenient, absorbent and don’t require the use of water or detergents. Several name brand manufacturers have introduced bio-degradable diapers or hybrid diaper consisting of a cloth cover with a disposable/flushable layer. But both still end up in the landfill.

While all sides of the debate make compelling arguments, the reality is they are not perfect and nor are their studies. Most of the published studies have been sponsored by factions from within the diaper industry. Not surprisingly the findings always support those parties that paid for it. A study by Franklin Associates in 1990 was funded by the American Paper Institute and showed disposable diapers to be better. A study by Lehrberger & Jones in 1991 was funded by the National Association of Diaper Services and favored cloth diapering.

A rare independent perspective was published in 2005 when London’s Environment Agency conducted a study to evaluate the impact of disposable versus cloth diapers. It found no clear winner or loser.

“There was no significant difference between any of the environmental impacts – that is, overall no system clearly had a better or worse environmental performance,” authors concluded in the report titled Life Cycle Assessment of Disposable Nappies in the UK.

As I watched my babies’ diapers being trucked out to the landfill each week, I started brainstorming an inconceivable idea: composting, a controlled natural process where yeasts, fungi and bacteria aerobically digest organic compounds turning it into dirt. When done properly composting produces little or no methane gas, destroys all pathogens, and yields rich, safe soil. What if we could turn something foul into a usable, salable product?

I first learned about composting when I was a little kid. I was at Pete Seeger’s — yes, the folk singer — house in Beacon, N.Y. and he had a composting toilet. It left such an impression on me that 30 plus years later I reflected on it as a possible solution to the diapering dilemma. I began looking for places to buy and compost diapers in the United States only to find that no such product or service existed here.

I discovered a company in Sweden that makes compostable diapers that look and feel like disposable ones and are non-toxic. I also found a space in the South Bay to compost the waste. My business plan went something like this: We’d drop off a batch of compostable diapers to a customer’s doorstep, pick up the dirty nappies, and drop them at the compost facility where they’d be turned to dirt, which would be used commercially.

EarthBaby started in September 2008 with 17 families in and around Mountain View. For 12 weeks, my business partners and I drove around in my personal pickup truck one morning each week dropping off and picking up diapers. After the beta program every single family continued using our service.

Eight years later we are expanding our footprint. My dream is to revolutionize diapering in the US and ultimately worldwide by composting diapers instead of disposing of them in landfills. While there are no simple solutions to most of our environmental problems, care and consideration at every step from the first to the last, is crucial to providing a healthy planet for our children.