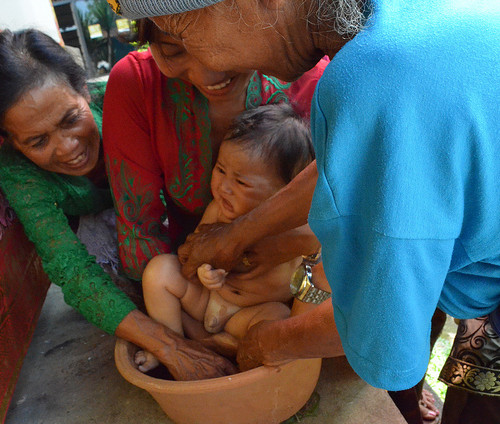 In America, we give birth to our baby, take pictures and head home, mementos in tow and hopeful that the freezer is packed with dinners for the next few days. We welcome visitors throughout our bonding and recovery. In this day, it is likely we “post” the step-by-step process, including the adorable yet slightly too large going-home outfit. Did you save what’s left of the umbilical cord? Is it in your baby book? Since mine was in my baby book, I saved my children’s. They think I am weird to this day, but, hey, it was a tradition. It was what my family did before me and, as far as I know, my siblings and cousins all have a little black rock-looking thing taped (tape now looking very yellow) in their baby book.

Around the globe women celebrate their newborn in very different ways.

Latin America’s post-birth tradition is called “la cuarentena.” It is a 40-day period where m0m abstains from sex and her sole focus is breastfeeding her newborn and resting. Family members help care for older children, cooking and cleaning. Some Latin American countries believe a mom should eat solely a homemade chicken soup during this period. A real life chicken soup for the soul!

In China “Zuo Yeezi” is the 30-day rest period post-baby that includes no bathing for mom, including no washing hands or feet. No cold of any kind including water, food and body temperature. Hands and feet should be hidden and remain warm at all times. New moms must recline and not sit upright, with one exception – using the restroom. One act is permissible: sex. Sex is allowed during this period!

During pregnancy Japanese mothers do not eat any food with claws (such as crab and lobster) as the belief is the child will be a thief. New mothers spend 20-30 days at their parent’s house without leaving, the returning to home and husband/father. She can’t wash her hair for one week because it is bad for her neck. The umbilical cord is saved in a wooden box and handed to mom upon hospital discharge. The cord is considered a prized possession in Japan.

It is likely you will find babies in Denmark and Sweden outside. Yes, actually napping outside. The fresh air, even in freezing conditions, is believed to promote healthy appetites and better rest so mothers take their babies on daily walks or leave them on the balcony or deck to nap. The theory is the cold air prevents colds.

Established in 1949, the Finnish (Finland) social security institution, known as Kela, ensures all parents receive a maternity package or cash grant (95% of the mothers opt for the package as it is worth more.) The maternity package or “box” includes bedding, clothes, sheets and the box itself which transforms into baby’s first crib!

The beautiful island of Jamaica celebrates birth and a rebirth of sorts by burying the placenta and umbilical cord and planting a tree. The process symbolizes renewal of life.

In Bali only the father or midwife can touch the placenta; known as “ari-ari, the placenta is believed a guardian angel or “twin” and protector until birth and is held in high regard. The “ari-ari” is washed, placed in a coconut and planted to the right of their house if it is a boy or left of it if the baby is a girl. Babies do not touch the ground for the first three months of life. The child is carried during this time and at the Nyabutan Ceremony the baby first touches Mother Earth.

Greek mothers stay inside for 40 days to avoid the “evil eye.” A new mother is believed to be a source of jealousy. After this period traditionally the first outing is to church for a blessing, then it is acceptable to go out. Traditionally Greek babies are named after their grandparents and this is widely practiced by Greek-Americans to this day.

Yucatan families believe after birth mom and baby are considered extremely vulnerable to spirits from the bush. All doors are kept shut and all cracks are stuffed with rage during the birth in order to keep spirits out. Mom and baby are then kept inside for seven days after birth. Twenty days later the midwife comes back for a postplartum massage which includes an abdominal binding. The mom’s breasts and head are often tied, too, in order to “close up the bones that opened during childbirth.” This “sobada” process concludes the childbirth process.

(From “Birth in Four Cultures” by Brigitte Jordan and Robbie Davis-Floyd, 1993)

These fascinating post-birth rituals may seem extreme but it is important to respect all cultures and traditions,. Just imagine the generations of respected elders passing the rituals down through the years. The circle of life is a beautiful thing.