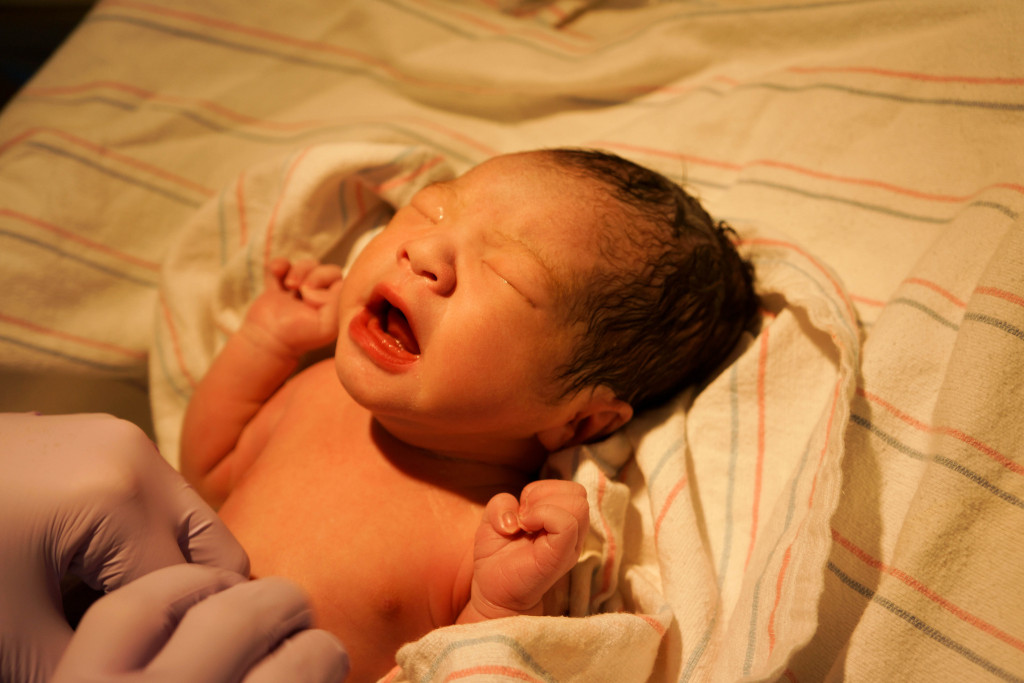 There are endless decisions to make when preparing for a birth, and it seems there are pros and cons on both sides of everything. Cord clamping, however, is rarely discussed, and generally done without consulting the parents.

Since 1913 it has been common practice in Western medicine to immediately clamp the cord after birth, known as Immediate Cord Clamping (ICC) ((http://www.drgreene.com/ticc-tocc/)) , a practice that has practically no known benefits; other than the baby needing immediate medical attention, or perhaps simple convenience for the nurse and doctor to be able to evaluate and wash the baby immediately after birth.

Why wait to clamp?

Up until the moment a baby is born, while in the womb, fetal circulation demands a continual flow of blood between the baby and the placenta, providing the baby with all the oxygen needed. At the time of birth, one third of a baby’s blood is still outside of its body, and inside of the placenta.

When babies are at term, roughly ⅓ of their blood supply resides in the placenta. During labor and delivery, much of that blood is transfused from the placenta into the baby, driven by the force of uterine contractions. This transfusion continues beyond the moment of emergence from the vulva; and, if left undisturbed for a short 1-3 minutes, the placenta will deliver around an additional three ounces of blood to the baby. ((http://www.scienceandsensibility.org/?cat=468))

Three ounces of blood is equivalent to a three month supply of iron for the newborn. Iron is critical to brain growth and development; iron deficiency is a known cause of cognitive and social-emotional deficits in infants, which may be permanent. As breast milk alone may not supply a baby with all the iron he or she needs, it’s that additional iron that makes delayed cord clamping (DCC) so important. ((http://www.scienceandsensibility.org/?s=delayed+cord+clamping))

Think this doesn’t affect the U.S.? At least 10% of the general U.S. toddler population (1-3 years of age) is iron deficient, with the prevalence rising well above 20% in selected ethnic and socioeconomic populations. Immediate cord clamping is only one of many factors that contribute to iron deficiency in early childhood. But babies who start out life low on iron have a very difficult time catching up. ((http://www.scienceandsensibility.org/?p=5730))

The easiest approach here is to ask your provider to wait until you birth the placenta before the cord is cut. This way, you know for certain that the placenta and cord have completed their work. If this is beyond the imagination or belief system of your provider, ask your provider to wait a mere 90 seconds following your child’s birth to clamp the cord. Even 90 seconds will make a difference (SeeTICC TOCC, Dr Greene’s campaign below). Or, how about just 30 seconds? There is evidence that the job can be completed in just 30 seconds if the child is placed below the mother in the range of 40cm following the birth (Yao and Lind 1969). ((http://www.thebirthpause.com/2013/02/optimal-cord-clamping-all-of-human.html))

To date, there is no evidence for significant risks to the mother or the baby associated with delaying cord clamping by 2-3 minutes. Until 2007, early cord clamping was part of the WHO protocol for preventing maternal postpartum hemorrhage, leading many practitioners to believe that late clamping might increase maternal bleeding. However, studies have found that this is not the case [14], and the WHO modified their protocol to reflect this evidence. ((http://scienceofmom.com/2012/10/11/why-consider-delayed-cord-clamping/))

Optimal Cord Clamping, also known as Delayed Cord Clamping, is simply waiting an additional 2-3 minutes after the birth of a baby to clamp the umbilical cord. As soon as the baby’s labor is complete, your placenta tries to give as much blood as it can to your baby; pumping out the extra blood still stored in it, about three ounces worth. By clamping the cord immediately after birth, this flow of blood is halted.

Very simply, when a baby is still inside her mother, fetal circulation demands a continual flow of blood between the baby and the placenta. It is at the site of the placenta where de-oxygenated blood is re-oxygenated and where nutrients are picked up for the baby, as waste is offloaded. At the time of birth, approximately two-thirds of the baby’s blood is in the baby’s body and about one-third of the baby’s blood is circulating in the cord and placenta. If the cord is clamped and cut immediately following the birth, the blood still circulating in the cord and placenta is lost to the baby. The result is a newborn starting life on the outside down a significant percentage of her blood volume (see both Simkin and Gibson below for illustrations of this process).

If the cord is left alone in the minutes following birth, this rich blood is pumped by way of the cord into the baby, a process referred to as the placental transfusion. A 2011 study by Farrar et al. measures the quantity and duration of the placental transfusion. The study concludes that for most babies the blood flow from placenta to baby was completed between 2 and 5 minutes with the blood volume averaging 30% (24-40%) of the baby’s total blood volume (Farrar et al. 2011). We would consider any adult down 30% of his or her normal blood volume to be in a state of extreme distress. Somehow, we have normalized this situation for our newest babies.

That may not sound like much, but three ounces of blood is equivalent to a three month supply of iron for the newborn. Iron is critical to brain growth and development; iron deficiency is a known cause of cognitive and social-emotional deficits in infants, which may be permanent. As breast milk alone may not supply a baby with all the iron he or she needs, it’s that additional iron that makes delayed cord clamping (DCC) so important.

WHO recommends cord clamping one to three minutes after birth while initiating simultaneous essential newborn care. Early cord clamping (less than one minute after birth) is not recommended unless the neonate is asphyxiated and needs to be moved immediately for resuscitation. ((http://www.who.int/elena/titles/cord_clamping/en/))

What are the Benefits of Co-Sleeping?